What’s the Meaning of “I am the Way, the Truth, and the Life” Said by the Lord? 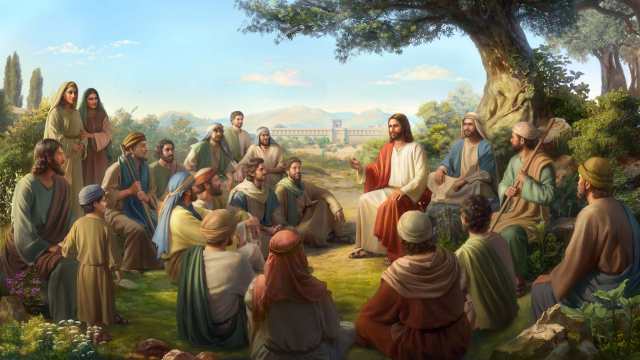 Christ Is the Truth, the Way, and the Life

The Lord Jesus was God incarnate, that is, God’s Spirit clothed Himself in the flesh as the Son of man to work in the human world. He appeared to be an ordinary, normal human from the outside, but He was Christ incarnate and God Himself and He possessed a divine essence. This is how the Lord Jesus could express God’s disposition and what God has and is, and could express the truth and perform the work of saving mankind based on their needs. It is something which nothing else in all of creation is capable of.

For example, in the later stage of the Age of Law when people could not keep the laws, they were sinning more and more, and were faced with the danger of being executed by the laws, God Himself became flesh and came among man to do His work in order to save man. The Lord Jesus brought an end to the Age of Law and opened up the Age of Grace. He provided mankind with the way of repentance and pointed out the paths of practice for the new era. He taught people to be humble and patient, love others as themselves, love their enemies, be honest people, use their hearts to truthfully worship God, love God, and more. The Lord Jesus also cured the sick, cast out demons, raised the dead, made the blind see and cripples walk…. Finally, the Lord Jesus was crucified as an eternal sin offering for mankind, redeeming them from sin. Thereafter, as long as people accepted the Lord Jesus as their Savior, and confessed and repented to the Lord, they were absolved of their sins, were no longer subject to the condemnation and punishments of the laws for violating the laws, and could enjoy the abundant grace bestowed by the Lord.

What’s more, if we do not understand Christ is the way, the truth, and the life, we will surely not gain God’s approval. Just like the Jewish Pharisees of that time, not only did they not acknowledge that the incarnate Lord Jesus was Christ and accept the truth expressed by the Lord Jesus, but even judged, condemned, and blasphemed Him. They just believed in Jehovah God in heaven but did not acknowledge Christ who expressed the truth and provided sustenance for people’s lives on earth. In the end, they crucified the Lord because of the Lord Jesus not obeying the laws of the Old Testament. They believed in God but had no knowledge that Christ is the truth, the way and the life. Thus, they became the classic examples of people who condemned and rejected Christ, and ultimately they were punished and cursed by God because of their resistance to Christ.

Christ of the Last Days Has Appeared and Brought the Truth, the Way, and the Life

Nowadays, the great disasters have come, the prophecies of the Lord’s return have basically been fulfilled, and the Lord Jesus has returned already as Almighty God, the Christ of the last days. On the foundation of the Lord Jesus’ work of redemption, Almighty God is doing the work of the Age of Kingdom, that is, the work of judgment beginning with God’s house. He has expressed all the truth to save and cleanse mankind; He has not only unveiled the mystery of God’s six-thousand-year management plan, the mystery of God’s incarnation, and the mystery of God’s name, but has also revealed the root of people’s sin, the true fact of mankind’s corruption by Satan, people’s satanic nature and essence that rebel against and resist God, and more. He also has expressed God’s disposition and what God has and is, such as God’s almightiness and wisdom, God’s righteousness and holiness, God’s authority and power, God’s uniqueness, and more. This makes people know God’s intolerance for man’s offenses and God’s essence of goodness. Almighty God has now uttered millions of words, most of which are included in the book The Word Appears in the Flesh, the Age of Kingdom Bible. This precisely fulfills the prophecies in the Bible, “I have yet many things to say to you, but you cannot bear them now. However, when He, the Spirit of truth, is come, He will guide you into all truth” (John 16:12–13). “He that rejects Me, and receives not My words, has one that judges him: the word that I have spoken, the same shall judge him in the last day” (John 12:48). And it says in 1 Peter 4:17, “For the time is come that judgment must begin at the house of God.”

Almighty God says, “Though Jesus did much work among man, He only completed the redemption of all mankind and became man’s sin offering; He did not rid man of all his corrupt disposition. Fully saving man from the influence of Satan not only required Jesus to become the sin offering and bear the sins of man, but it also required God to do even greater work to rid man completely of his satanically corrupted disposition. And so, now that man has been forgiven of his sins, God has returned to the flesh to lead man into the new age, and begun the work of chastisement and judgment. This work has brought man into a higher realm. All those who submit under His dominion shall enjoy higher truth and receive greater blessings. They shall truly live in the light, and they shall gain the truth, the way, and the life.”

“By means of this work of judgment and chastisement, man will fully come to know the filthy and corrupt essence within his own self, and he will be able to change completely and become clean. Only in this way can man become worthy to return before the throne of God.”

From God’s words we can see that this stage of Almighty God’s work of judgment in the last days is based on the needs of people today. Although we have been forgiven through our belief in the Lord, our sinful nature is still rooted within us, and we are therefore still capable of involuntarily sinning and resisting God. For example, we are still able to tell lies and deceive others; we can still follow evil worldly trends, covet vanity and pleasures, and thus our hearts often grow apart from the Lord; we can still be arrogant and conceited and arbitrarily judge others; when encountering natural or man-made disasters we can still complain about God and blame Him. There are many such examples. It can be seen that we have only been redeemed, but our sinful nature is still deeply rooted within us, and therefore we are frequently unable to stop ourselves from sinning and resisting God. We want to cast off the bonds and fetters of sin but have nowhere to turn, and no one can point out a path for us to escape the bondage of sin.

Almighty God, Christ of the last days, has performed the work of judgment in accordance with people’s needs, has expressed all the truth to cleanse and save mankind, and has directed people onto the path of purifying their sins. As long as we are able to accept the truth expressed by Christ of the last days and experience His work of judgment, we will gradually attain purification in our corrupt dispositions and become people who conform with God’s will. If this weren’t God Himself, who else could reveal mysteries? Who else could judge and expose the root of our sins? Who could express the truth to purify and save people and could show us the way to cleanse our sins? Who could express God’s righteous disposition and what God has and is? Besides Christ, no man could achieve this. Thus, it is evident that Almighty God is the truth, the way, and the life, and that He is the Lord Jesus returned—He is Christ of the last days.

Editor’s Note: Through the fellowship above, I believe you’ve understood the true meaning of the Lord’s words “I am the way, the truth, and the life.” If there is still anything you do not understand, please contact us via online chat.

Recommended:
What Is Incarnation? How Can We Know God’s Incarnate Flesh?

Previous Post What Does Son of Man Mean in the Bible?
Next Post What Is Christ? Who Can Be Called Christ?

Many biblical prophecies say the Lord Jesus will return as the Son of man in the last days. What Is the Meaning of the Son of Man? Read on to find out.

As for what Christ means, this is a mystery of the truth that we believers in the Lord fail to understand. Although we all know the Lord Jesus was Chr…