“1 Then shall the kingdom of heaven be likened to ten virgins, which took their lamps, and went forth to meet the bridegroom.

2 And five of them were wise, and five were foolish.

3 They that were foolish took their lamps, and took no oil with them:

4 But the wise took oil in their vessels with their lamps.

5 While the bridegroom tarried, they all slumbered and slept.

6 And at midnight there was a cry made, Behold, the bridegroom comes; go you out to meet him.

7 Then all those virgins arose, and trimmed their lamps.

8 And the foolish said to the wise, Give us of your oil; for our lamps are gone out.

9 But the wise answered, saying, Not so; lest there be not enough for us and you: but go you rather to them that sell, and buy for yourselves.

10 And while they went to buy, the bridegroom came; and they that were ready went in with him to the marriage: and the door was shut.”

From these verses, I see that as for who can enter into the kingdom of heaven, the Lord Jesus told us a parable of “five wise virgins and five foolish virgins.” He said that those who could prepare oil were wise virgins and they would be brought into His kingdom, and that those who didn’t prepare oil were foolish virgins, and they would be abandoned by the Lord and would become so pathetic. 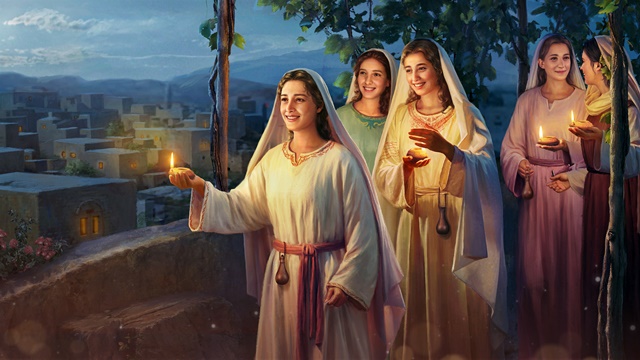 Reflecting on Myself and Seeing Whether I Was a Wise Virgin

I thought back to my faith in the Lord these years: The pastors and elders always said that to be wise virgins, we should ardently pursue, attend Bible reading groups regularly, listen to them interpret the Bible, pray to the Lord diligently, expend and work for the Lord … I continued to pursue as what the pastors and elders said all along. Even suffering illnesses or something unfavorable, I tried my best to control myself to not follow my flesh or complain to the Lord; when my neighbors looked down upon and belittled me, I prayed to the Lord and asked Him to give me tolerance and patience so that I could bear no grudges, and sometimes I even prayed for them. I thought that to do this was to be a wise virgin, and to prepare oil for myself, and I would be raised up into the kingdom of heaven when the Lord came. However, after several years passed, I saw that various kinds of disasters continued to happen and the prophecies of the Lord Jesus’ return were basically fulfilled, but I still didn’t meet the Lord. I felt so confused: Judging from all the signs, the Lord should have already returned, but how come the Lord has not taken me up into the kingdom of heaven? Why is this? Is my preparing oil this way not in line with the Lord’s will?

Knowing the Meaning of Wise Virgins

Through a period of time of seeking, one day, I read this following passage in a book by accident, “‘Five wise virgins’ refers to a number of people, and ‘five foolish virgins’ represents one type of person, but neither refers to the firstborn sons. Rather, they represent creation. This is why they have been asked to prepare oil in the last days. (Creation does not possess My quality; if they want to be wise ones, they need to prepare oil, and thus they need to be equipped with My words.) ‘Five wise virgins’ represent My sons and My people among the humans I created. They are called ‘virgins’ because they are gained by Me, despite being born on earth; one might call them holy, so they are called ‘virgins.’” (“Chapter 116” of Utterances of Christ in the Beginning). After reading these words, I remembered that the Bible says, “My sheep hear my voice, and I know them, and they follow me” (John 10:27). “These are they which follow the Lamb wherever he goes” (Revelation 14:4).

Contemplating these words repeatedly, I understood a bit: The Lord Jesus had prophesied that at the time of His return there will be two kinds of people. The first kind will be like wise virgins and another kind will be like foolish virgins. Whether they can recognize the words of God’s return will reveal whether they are wise virgins or foolish virgins. All who hear the words of God and recognize it is the bridegroom’s voice, and thus accept and submit to Christ, and follow God’s new work, these are all wise virgins. They focus on listening to God’s words and can hear and know the voice of God from His words. Yet all who are not able to hear God’s voice, who listen and still can’t recognize the bridegroom’s voice, and thus deny and reject Christ, they are all foolish virgins. They only act from the outside but don’t pay attention to listening to God’s voice, and have no knowledge of God’s words. Therefore, they always rely on their own notions and imagination to believe in God that they are abandoned and eliminated.

The Behavior of Wise Virgins

Only then did I realize that the practice of pursuit of being wise virgins, which was told by the pastors and elders, is totally not in accordance with the Lord’s will. All who only pay attention to laboring and sacrificing for the Lord, and understanding the literal words of the Bible but pay no attention to listening to the voice of the Lord are not the wise virgins but foolish virgins. Recalling the Pharisees resisting and condemning the Lord Jesus two thousand years ago, they all were proficient in the Bible and laws, knew a lot of doctrines of the Bible, and also worked tirelessly, but they didn’t pay attention to practicing and experiencing God’s words, and didn’t know God at all. When the Lord Jesus came to speak and work, they didn’t focus on seeking and investigating His work, nor focus on listening to His voice. Instead, they relied on their own conception and imagination to define the work of the Lord Jesus and even nailed Him to the cross alive. As a result, they suffered punishment from God.

Thank the Lord for His enlightenment so that I can get the new light. Now I know that the most important thing of being a wise virgin is to pay attention to listening to God’s voice. As soon as we hear that someone yells “the bridegroom comes,” we should immediately seek and investigate whether or not God utters His voice and whether or not He has appeared. Only by this way can we welcome the Lord’s return. Must everyone have known how to be a wise virgin. If you are a wise virgin, I believe that you shall welcome the Lord’s return!

Next Post Differences Between the Wise and Foolish Virgins

Many biblical prophecies say the Lord Jesus will return as the Son of man in the last days. What Is the Meaning of the Son of Man? Read on to find out.

Differences Between the Wise and Foolish Virgins

I am confident that all believers in the Lord are familiar with the parable of the ten virgins said by the Lord Jesus. We know that only wise virgins …

Why Are There Different Names of God in the Bible? What Are the Meanings of God’s Names?

When it comes to God’s name, we all know that the Old Testament records that only Jehovah is God’s name and thus it shall be forever. The New Testamen…